Mine-Bombs Addon - Do you like to try different TNT blocks in your Minecraft world? Do you like to look how they explode? So, try out new kind of TNT blocks whch combine lots of interesting features. Firstly, you'll get the new feature which allow to them to explode. Secondly, this very block lets you throw primed TNT blocks. And the last, but not the least, is that now new TNT cannons will be able to gun down explosive bombs at your enemies. That's a cool addon which can be helpful and enjoyable in your world.

Mine-Blocks appeared here instead of Experience Bottles (also known as Bottle o’ Enchanting). You can throw this bomb and it'll spawn a primed TNT block. Now the TNT has got a new design, that's its new color which is deeply blue and looks very nice in any environment. This block will explode a little bit and it'll be able to make a great knockback effect. Be careful while using it. 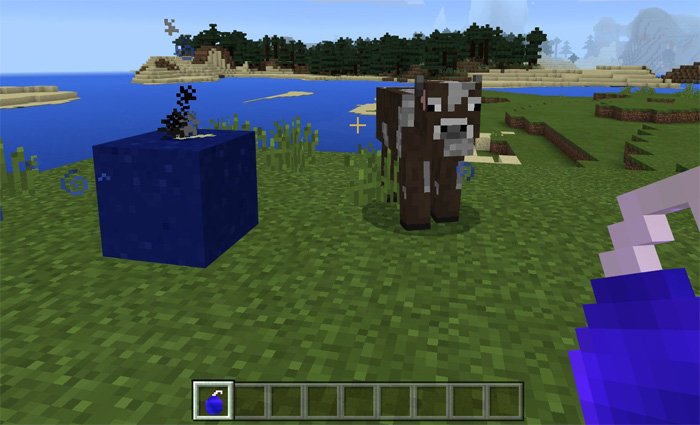 Instead of Wither Skeletons you've got TNT cannons. They will be helpful during some battles when you have to protect your base. Just put them in different spots of your base ans they'll gun down any hostile mobs automatically.

Moreover, the creeper and the skeleton look now differently. The skeletons have a power to throw Mine-Bombs. Creepers will cause fire when they explode.