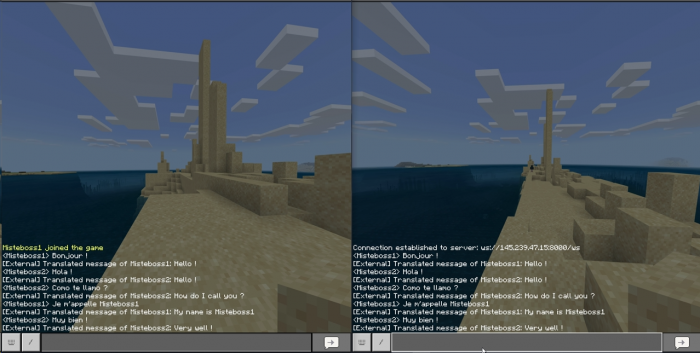 By cathy
Mod Minecraft Translator Script is a very valuable and useful script since it offers you the opportunity to communicate with any player, regardless

Mod Minecraft Translator Script is a very valuable and useful script since it offers you the opportunity to communicate with any player, regardless of his / her spoken language.

Now your lack of knowledge of a certain language will no longer prevent you from talking with people that do not speak English. The Minecraft Translator Script enables you with the ability to translate messages from any language during your playing process in the Realms and in your world.

The present script translates any messages that you get from foreign-speaking players in English in your world and the realms. This is very handy since it lets you communicate with players from all over the world.

For using Minecraft Translator Script, you will have to respect the following requirements: default permission: OPERATOR and to enable the cheats.

We are sure that you faced the communication problem due to the language barrier at least once in your Minecraft playing experience. Now, this is no longer a problem, so feel free to install Minecraft Translator Script, share the news with your friends and leave feedback on our website. For more new, useful and cool mods, access our mods section. Besides this, by visiting us, you will have the chance to go through the newest maps, texture packs and much more. Enjoy!