By cathy
Minecraft PE 1.14 brought bees to our worlds and they made the game more interesting and functional, thanks to all the blocks, beehives, and other

Minecraft PE 1.14 brought bees to our worlds and they made the game more interesting and functional, thanks to all the blocks, beehives, and other useful features brought along. Today we will meet their queen and this is possible thanks to Addon Queen Bee. Let’s see what its features are.

Naturally, the Queen has an absolutely different behavior from the custom bees. Like a real queen, it does not work and it does not collect pollen from flowers.  Their favorite activity is to fly in and out of the nest all day long.

Queen Bee is not a peaceful mob.  If a player comes near it (within a range of six blocks), he/she risks being attacked. You can only protect yourself from the mighty queen by holding a flower or a royal jelly bottle. When the Queen of bees follows its victim, its eyes turn red (see pictures below).

Queen Bee in its normal state

Queen Bee in an angry state

Another fact about the queen’s anger is that when it is in such a state, the nearby bees get angry too and vice versa. It may sting many times because it does not lose its sting after attacking as ordinary bees do.

The worst Queen Bee’s enemy is the Iron Golem who has the tendency to attack it with no obvious reason.

If killed by a player or by a tamed wolf, the queen will drop up to twelve experience orbs.

And now, let us talk about the royal jelly bottle we mentioned at the beginning. To craft it, you will need an empty royal bottle. See crafting recipe below.

Below you can see the crafting recipe for the royal jelly bottle. By drinking it, your hunger will be restored by eight points. 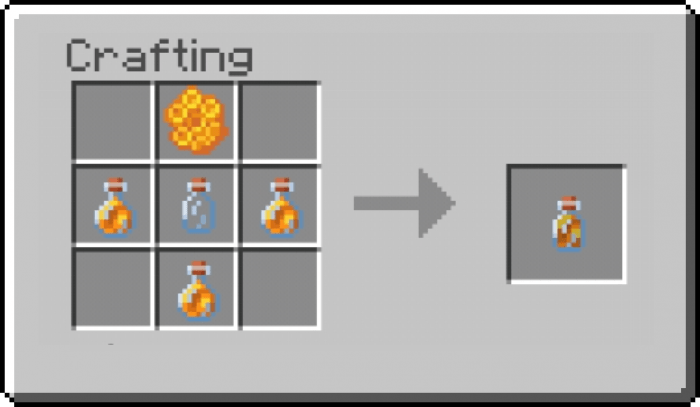 This is not everything the royal jelly can be used for. It also restores saturation and if given to a baby bee, it will turn into a queen bee. Such a bottle with royal jelly can be used in two portions, for example, use the first portion to restore hunger and the second to turn a baby bee into a queen. Or you can keep it only for nutrition. It is up to you. After using it, you will get the empty bottle that you can use to craft more royal jelly bottles.

We are sure you want to try this wonderful addon, so click on the download button, share the article with your Minecraft friends and leave feedback.

For other interesting mods, as well as textures, and maps, visit our website.

Have a great time!