By cathy
Today is a very important day because all our subscribers will have the chance to download the grandest game release of this season, which is MCPE

Today is a very important day because all our subscribers will have the chance to download the grandest game release of this season, which is MCPE 1.13.0. This version is compatible with absolutely all the maps, texture packs, mods, and seeds available on our website.

Below you can take a look at the main changes, updates, and fixes present in this version, after which you can feel free to enjoy all the new surprises offered by it for free.

Before starting with the changes and fixes, let us remind you that by joining this beta, you will replace your already working versions, so make sure to back up your worlds as not to lose something important. Also note that while using this beta, you will have to forget about realms and non-beta users. They are not accessible for beta using players. Another important fact is that if you create any worlds in this version, you won’t be able to access them in earlier versions. Make sure to save them.

That’s all the rules for now. Now it is time to learn about the most important Minecraft PE 1.13.0 features.

The new version comes with a fantastic surprise for all animal lovers: the fox. The new animal comes in two types: the custom fox and the arctic one. The artic fox is not much different from the custom one, but it spawns in snowy biomes and represents an attractive treat for the polar bears. A funny feature of the new beasts is that they are able to carry diverse items in their mouths. They usually not only carry the items, but also eat them and sometimes this causes interesting effects. In one word, the new animals are very fun to monitor and even more fun to tame. 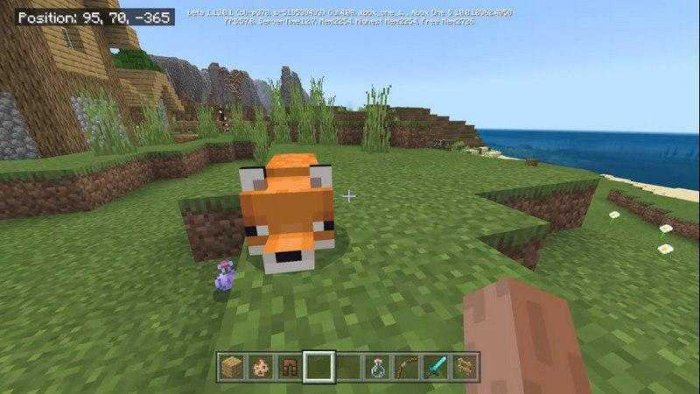 Other new features of this version are that the structure blocks have been subject to serious improvements and that there is a new “PersistComponent” aimed at making the mobs more consistent.

The list of changes is not that big this time, but the adopted ones are definitely very useful. The most useful one, in our opinion, is that the players will get a message telling if a desired Marketplace pack works on the MCPE version they are using at the moment.

Another change to improve the player’s Minecraft gameplay is that the chat has more additional options now.

There are also more changes featured in this version, but most of them are intended for the map and addon developers.

A lot of crashes have been detected and the Minecraft Developers had a hard time fixing it. Crashes occurring when exploring the world templates (happening from time to time), when starting creating a new world, when entering the multiplayer mode, when choosing some skins, when creating worlds using some Marketplace packs. All of these crashes were fixed and will not impede players to play peacefully anymore. You might have noticed other performance errors before too, but be sure that most of them were removed in this version.

There are also a lot of fixes in regards to the gameplay. We will tell you about several of them here. Now if you lit a TNT, it will not fall between blocks. Another TNT fix is that its explosion will be able to knock you back even if you are located in the water. Some camera-related issues were fixed too, for example when it failed to rotate properly from the third person.

Here is just a part of the fixes that are meant to make the game nicer and more logical:

If you are ready to discover more changes and fixes, download Minecraft Bedrock by clicking on the button below. We are sure you will be nicely surprised by all the benefits it has to offer and starting with the moment you install it, you will have a much comfortable and pleasant gameplay.

Important: To fully benefit from all the features this version has to offer, enable Experimental Gameplay mode.

In case you want/need any earlier game versions, visit our Download Minecraft PE section to get them for free.