By cathy
Perhaps you didn’t know how to spend your weekend this time, so we have a suggestion for you: try the new Minecraft PE 1.13.0.13 beta version. You

Perhaps you didn’t know how to spend your weekend this time, so we have a suggestion for you: try the new Minecraft PE 1.13.0.13 beta version. You will discover a lot of bug fixes and improvements regarding the gameplay, as well as the graphics, user interface, and mobs. In addition, the version brings a list of changes for the map makers and addon creators.

First of all, we have to tell you about a serious issue that most likely you and other MCPE users have noticed. Many are concerned about custom skins not importing in this version. Unfortunately, the problem persists, but the Minecraft PE developers are aware of it and promised to remove it in the next game version.

Another important thing is that the mapmakers and the addon creators will face a whole list of changes starting with this beta and 1.13 in general. There is a list of new rules regarding the pack manifest that they will have to adapt to. It has another format of 2 now and all the pack types have their own requirements. The requirements affect mainly the fields that have to be necessarily filled. For example, in behavior packs and in resource packs you will have to fill the min_engine_field, want it or not. The developers recommend using the newest Minecraft PE version for doing this (for example 13 or 0).

Now let us see what the new beta brings for those who use Minecraft Bedrock for playing:

Some fixes in this beta are more important, some are less, but all of them were carried out to make your gameplay more comfortable. Now you can enjoy your Minecraft PE experience without getting annoyed by issues like not being able to open the inventory while sitting in a boat.

The game performance and the animation was worked on and you will notice it even if you are using a low-end device for playing MCPE. Crashes occurring when the player uses the /execute command, when exiting a multiplayer game, when opening a new chat after exiting multiplayer were all fixed.

Mobs also had to go through some fixes in this version. Now the farmers will harvest their crops properly, the parrots will have a normal animation when sitting on shoulders, the tropical fish, as well as the turtles will not drift downward anymore and during raids, the villagers will be able to hide better than before.

The players will also notice that the distance between some buttons in the pause menu was fixed, that the player that stops sneaking at the edge of a block will not fall down now, that you will be able to repair items on an Anvil again, that you will not hear multiple hit sounds in case you are hit with an arrow while being underwater. 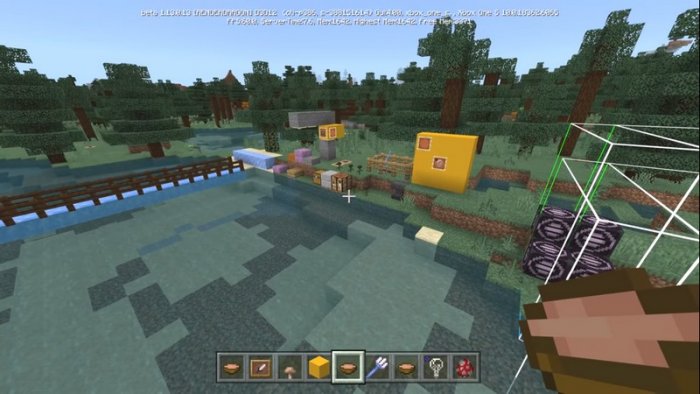 To discover the entire list of fixes and changes, we suggest you download it (see button below the article) and explore it to the max. Do not forget to invite your friends and to leave feedback.

Before starting enjoying the brand new version, do not forget that it will replace your work in progress, so make sure to save your worlds. The builds you are going to make in today’s version should be saved too because you cannot open them in older game versions.

In case you need any older Minecraft Bedrock versions, you can find them in our Download Minecraft PE section and by continuing to explore our website, you will discover dozens of new textures, mods, maps, and skins. Enjoy your MCPE experience!