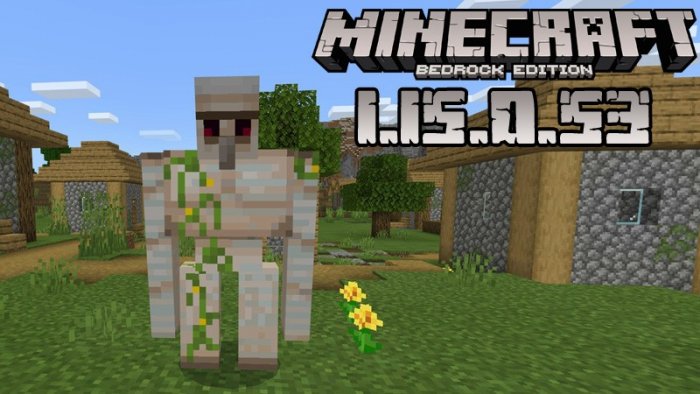 By cathy
This weekend is very special to us and we hope it is to you too because we are to explore a new game version, that is Minecraft PE 1.15.0.53. Please

This weekend is very special to us and we hope it is to you too because we are to explore a new game version, that is Minecraft PE 1.15.0.53. Please take your time because the list of changes is long.

Before getting to the changes, note that this is not a full version and you have to keep in mind the rules regarding betas, meaning that your work in progress will be replaced by it as soon as you install it, so you’d better save your builds as not to lose them. The builds created in 1.15.0.53 can be opened only in 1.15.0.53 or in the upcoming versions, so if you are planning to use earlier game versions in the future, save these builds too. Another important fact is that unfortunately, you won’t be able to play in Realms and with other MCPE user preferring full game versions. We also must prevent you that the builds created in betas might not be as stable as the ones created in full versions, but anyway, we hope you will have nice game experience, so let’s get to the newly introduced changes:

Like always, we will start with the fixed game crashes and will continue with the bugs:

Besides all the above-listed fixes, the developers introduced several changes in regards to some entities, blocks, building processes (especially gates) and UI, but to find out about all of them, we suggest you download the version and explore for yourself.

We are sure you want to finish reading the article as soon as possible and start playing, but first, we recommend you to watch the video trailer in order to discover more details about this update.

Follow our website to always be up to date with the latest game versions and to explore dozens of interesting maps, skins, and mods with free download buttons. Have fun!