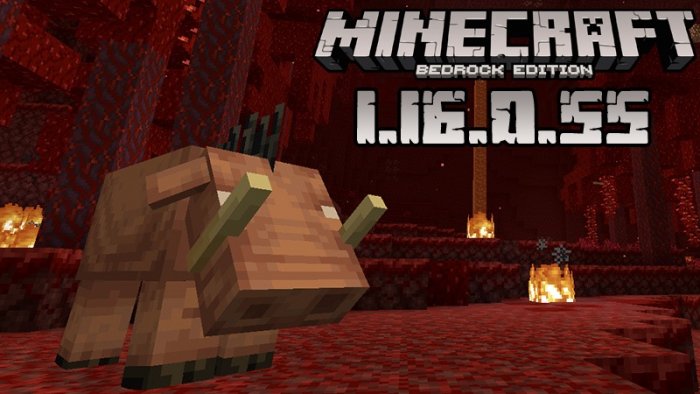 By cathy
Our website’s subscribers have the opportunity to meet the weekend with a new game version again. This time we will explore Minecraft PE 1.16.0.55.

Our website’s subscribers have the opportunity to meet the weekend with a new game version again. This time we will explore Minecraft PE 1.16.0.55.

First of all, let us make one thing clear: this is not a full version and this means that the builds you will create in it may not be as stable as you could expect from the ones created in full game versions. Second, prevent your friends who use full versions that you won’t be able to play with them while trying 1.16.0.55. And one more thing: when installing and intending to try a new version, always make copies of your MCPE work in progress. Just in case.

And now let’s see what we will discover in this brand new beta:

Like always, the hard-working MCPE team had to remove a number of issues. They were all fixed, but before this release, they used to occur in the following situations:

Some features regarding the scripting engine and add-ons had to be modified and updated too because their earlier state used to trigger in-game problems or they were simply useless.

The wall signs hanging in the air after the door which it was hanged on was destroyed were also fixed.

In addition, the behavior of three mobs, which are the iron Golem, the Ghast and the Creeper was also modified a bit.

The developers also carried out some improvement work in regards to the graphics and rendering, but most importantly, they removed the crashes that used to occur during the gameplay, when some mob’s state changed, when players entered the water, and when leaving a world where particles are present. The crash occurring when trying to create a new world and affecting only the iOS users was also removed.

To learn more about this beta, we suggest you watch the small video trailer below this article and if you want to start exploring it, all you have to do is push the download button.

If you want your friends to find out about the release, share this news with them and let us know about your suggestions and opinion on it too by leaving feedback.

Make sure to visit us on a regular basis in order to always be up to date with the latest game versions and to use the chance to download a lot of interesting maps, mods, textures and other cool MCPE-related novelties for free. Enjoy!