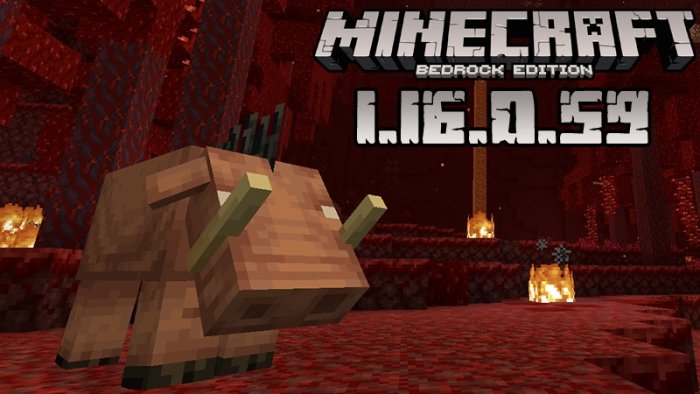 By cathy
Minecraft Bedrock 1.16.0.59 is the brand new game beta that will give us the chance to discover several important changes carried out in relation to

Minecraft Bedrock 1.16.0.59 is the brand new game beta that will give us the chance to discover several important changes carried out in relation to the Nether. Of course, the update is not as complex as Minecraft 1.16.0.57 and definitely not like Minecraft 1.16, but we will still find out a lot more about the mysterious Nether and its new features. Thanks to this beta, this creepy place will be even more fascinating.

Besides the changes and fixes related to the Nether, the developers worked on other game issues too, but today we will focus only on what is most important, but we are sure you will notice and appreciate the rest of them during your gameplay too.

Traditionally, we will start with the game crashes. Thankfully, this time there are not so many of them. Actually, only one represented a really serious problem and it used to happen when stacking different slabs. Naturally, the crash was removed.

And now, let’s talk about what we are here for, that is the changes in the mighty Nether:

By installing this beta and exploring the nether, you will be able to check these changes for yourself, so go on and click on the download button below the video trailer, share the news about the update with all your MCPE buddies and leave feedback.

To always be up to date with the latest game versions and to discover the most popular and interesting MCPE downloads, visit our website regularly. Enjoy!