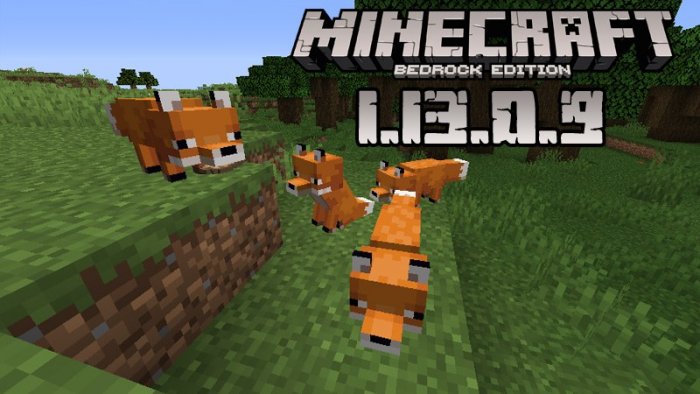 By cathy
All MCPE fans have the chance to celebrate the start of a new season by checking a brand new beta version of their favorite game, and this time there

All MCPE fans have the chance to celebrate the start of a new season by checking a brand new beta version of their favorite game, and this time there is a lot to check because Minecraft PE 1.13.0.9 brings an incredibly long list of fixes, as well as some changes and new cool features!

We do suppose that first of all you would like to discover what’s new, so let’s get going.

The most interesting novelties in this version are new abandoned villages, the wither rose, the suspicious stew and a new kind of mushrooms: brown mushrooms! You will also be able to place the item frames not only on walls from now on. They can be placed on the floor, on the ceiling or wherever you prefer to.

Besides the above-mentioned features, there are also new note block sounds (for the hay bale, wool, packed ice, soul sand and others) and light blocks for the map makers. These light blocks have light levels from zero to fifteen and they can be supported by the following commands: /give, /setblock, and /fill.

Starting with 1.13.0.9, the players will have the chance to celebrate the end of a village raid and to see the game credits after destroying the Ender Dragon.

And these are not all the new features! The custom players have a height of 1.8 blocks now, the squids will spawn in rivers and the villagers will heal easily only by having some bread in their inventories.

These are more or less all the novelties you will be able to discover by trying the new beta.

Like always, the new game version brings fixes in addition to the changes and new features, so let us tell you about the main ones:

Most likely, for starters, you will notice the general fixes in MCPE. The very annoying fact that the worlds were loading for a very long time and that the game used to freeze after this loading was taking place was worked on and the issue resolved. Also, the crashes occurring when trying to craft enchantments and when trying to enter the game when someone invites you were fixed. When trying to enlarge an already existing village, many small ones used to spawn. This strange problem was also resolved.

The gameplay was also worked on by the MCPE developers. Now the lightning is striking more rarely, the lightening of the trident affects not a certain spot, but a larger area. The arrows are stronger now, they can destroy armor and the armor is being dropped correctly by the mobs. A lot of improvements were done in regards to the maps, for example they are loading way quicker now when exploring.

A lot of attention was drawn to the boats and everything connected with water in Minecraft.  The player’s swimming state when he/she exits the water was corrected; the explosions are capable of dealing with damage in the water. During boat rides the player won’t stop rowing if he/she decides to open his/her inventory.

Now let’s talk about the fixes that were carried out in regards to the blocks and items in MCPE. Now the grass will not stop growing because of the barrier blocks, but it won’t be able to grow under farmland ones. The turtle egg items now look like the ones in the Java edition of the game. The icons of the trapdoor items have the right texture in the inventory. The woodblocks with 6 sides can be used as fuel now. The items that the player cooks on a campfire will stack in a proper way. So will the leaves collected with a silk touch.

Of course, the mobs could not be ignored in this version, and they were subject to some fixes too. The Wither Skeletons no longer suffer damage from Wither Effects; Zombie pigmen can be ridden by baby zombies now; the foxes fear thunderstorms and seek to hide somewhere when they occur; the parrots have more freedom now: they have the ability to fly over high barriers like walls, fences, etc.; the Phantom’s wings move faster now.

Issues related to the UI, commands, and graphics that you might have faced were fixed too, at least most of them.

We are sure you want to check all the changes, new features, and fixes by yourself, but first, take a moment to watch the video trailer and share the good news about the release of the new version with your friends!

Until we have the download link available for you, we would like to listen to your opinions and requests.

Also, we offer you to try the latest maps, mods, and texture packs available on our website!