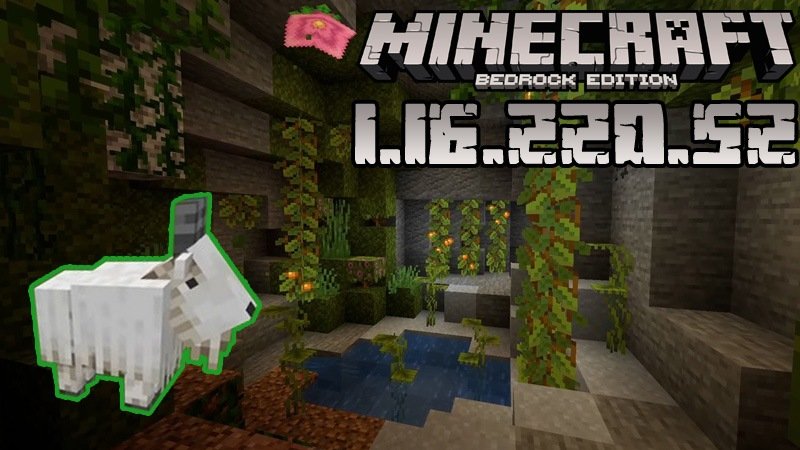 By cathy
You accessed our website just on time because we have a new beta version prepared for you to learn about. Minecraft Bedrock 1.16.220.52 is one of

You accessed our website just on time because we have a new beta version prepared for you to learn about. Minecraft Bedrock 1.16.220.52 is one of those updates bringing very many bugfixes and tweaks, but most importantly, interesting new features!

The new features developed for this beta are numerous and cool. They will be a very good surprise for those players who like exploring caves and everything that has relation to them.

Before describing the update, we must remind you that while using betas, you cannot play in Realms and/or with MCPE players who prefer using full versions. You should also know that it is recommendable to back up your existing builds because otherwise you risk losing them after installing the present one. Another thing that you should know about is the fact that you will not be able to access the builds created in 1.16.220.52 with earlier game versions.

This week, the developers continued to improve the gaming world generation. All the underground features, including caves, structures, and more, will now generate down to level y-64. The build limits and the world generation itself were also enlarged, both down and up. Its entire range is of 384 blocks now.

Another grand thing the team worked on was the development of new caves. These caves are called Lush Caves. They didn’t introduce them in the world generation yet, but you can already explore all the blocks and vegetation planned to generate there. This way, you will discover Dripleaf Blocks which are mainly decorative and can be grown using bone meal. Initially, they are small. You will also come across Moss Carpets that are also meant as decorative blocks. The player can use a Hoe to dig these carpets, as well as Moss Blocks that can serve as base blocs for growing vegetation if fertilized. Rooted Dirt is one more new block. If the player interacts with a hoe with it, he/she will be able to extract the roots and turn the block into dirt. These caves also have Azalea, Azalea Leaves, and Flowering Azalea growing in them. Collect them and you will obtain a new kind of fuel if required.  And the most noticeable and interesting feature generating here is the Cave Vines. They can be climbed on like the vines we already know about, but this is not their only characteristic. You will notice that on some of them there are awesome glowing berries called Glow Berries. The vines containing such berries give off light and the berries leap when someone interacts with the vines. In case the cave vines do not have berries, the player can fertilize them and they will start growing.

Dear MCPE fans, these are the features you are going to discover by installing this beta, but the developers also had a big number of issues to deal with. The most serious ones were:

Fortunately, all these and other minor problems have been fixed and now we can enjoy a bugless gameplay and discover the new features implemented by the creative MCPE developers.

If you are happy about this release, share the good news with other MCPE players you know and leave feedback.

Visit us on a regular basis and besides learning about the newest game versions, you will be able to try the freshest maps, mods, and other surprises for free. Enjoy!